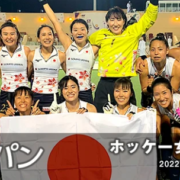 The game schedule which will be played in the National Hockey Stadium in UCD Belfield Campus is set out below:

Senior women’s head coach Sean Dancer is thrilled to get top class opposition in Japan, currently 10th in the world and two places above Ireland. They bring a fast, attacking style which will make for a thrilling series.

“With all the hockey being played around the world, it has been difficult to host matches in Ireland in recent times so we are delighted to be able to play these at home,” Dancer said.

“It has been a difficult couple of years with Covid and the girls are excited to see home crowds and the legendary Irish support back out in force.”

Tickets can be purchased at  https://hockey.ie/buy-tickets/