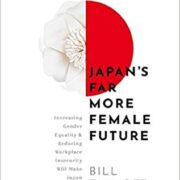 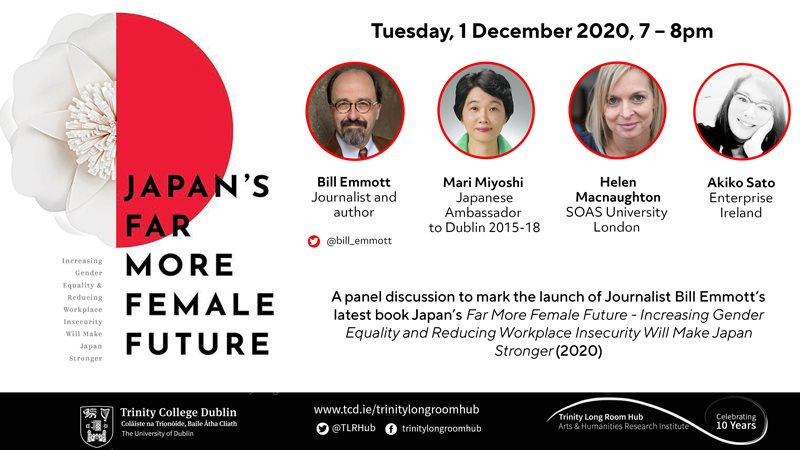 In addition to a presentation by Bill Emmott, guest speakers include: A recorded video conversation between Bill and Ambassador Mari Miyoshi, Japanese Ambassador to Dublin 2015-18, who features in the book as being the most senior woman in the Japanese diplomatic service; two panelists, Helen Macnaughton, Senior Lecturer in International Business and Management, SOAS University of London and Akiko Sato, market advisor at Enterprise Ireland. The evening will be chaired by Prof Eve Patten, Director of the Trinity Long Room Hub.

About Japan’s Far More Female Future
Japan’s socio-economic postwar history has been largely male dominated, and still women occupy a much smaller share of leadership positions than in other rich countries. However this reflects a wide gender inequality in tertiary education in the generations now holding or entering leadership positions. Beginning in the 1990s, female access to higher education converged dramatically with that of males, reflecting changing family and social attitudes, which promises to help Japan converge with European experience during the 2020s and 2030s. Through analysis of such trends and policy options, combined with interviews with 21 female role models from business to the arts, Bill Emmott takes an optimistic look at how Japan can achieve greater social justice and sustainable prosperity for the future, helping it to adapt to an ageing and declining population.

For more information and to register for this event: https://zoom.us/webinar/register/WN_bi1LvJRQQ6WEXvxJ4H-u-w 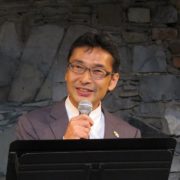 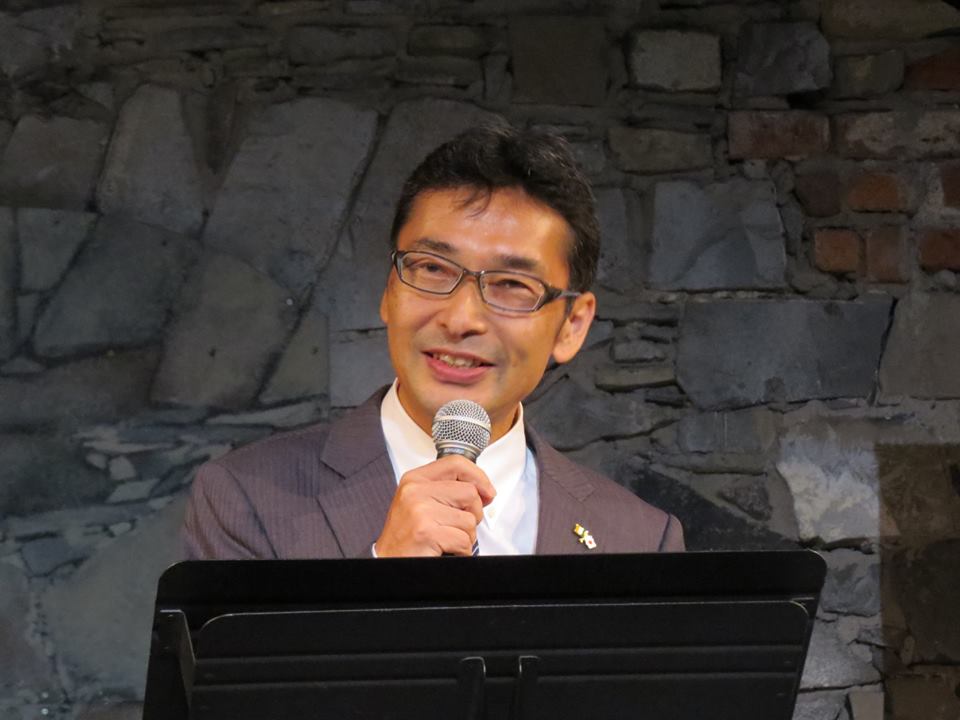 On 30 July 2017, Mrs. Mari Miyoshi, Ambassador of Japan to Ireland, presented the Japanese Foreign Minister’s Commendation to Mr. Bon Koizumi and Mrs. Shoko Koizumi for their outstanding contribution to the mutual understanding and friendship between Japan and Ireland.

Mr. Bon Koizumi is the great-grandson of the writer and translator Lafcadio Hearn (1850-1904), perhaps “Japan’s best-known Irishman” (John Moran) who was born on Lefkada Island, Greece, to an Irish military surgeon and a Greek mother. He is also known as Yakumo Koizumi in Japan where he found a home, married Setsu Koizumi, the daughter of a Matsue samurai, became a citizen and wrote 14 books on cultural subjects.

Bon and his wife Mrs. Shoko Koizumi have been introducing the life and works of Lafcadio Hearn to countries around the world including Japan, Ireland, and Greece since 1990. Hearn’s understanding of Japanese culture and his ‘open-minded’ spirit helped many to nurture mutual understanding and friendship between Japan and Ireland.  As board members of the Sanin Japan-Ireland Association, Mr. and Mrs. Koizumi have been involved with various activities for the purpose of not only publicising Bon’s great-grandfather but also introducing Irish culture to Japan.  Matsue City, where Lafcadio Hearn used to live, has a strong relationship with Dublin, often exchanging reciprocal visits.

At the presentation ceremony, Ambassador Miyoshi said, “I would like to express my gratitude to Mr. and Mrs. Koizumi for their outstanding contributions to deepening the mutual understanding and friendship between Japan and Ireland over the last decades”, and continued, “On this occasion of the 60th anniversary of Japan-Ireland diplomatic relations, it gives me great pleasure to award the Foreign Minister’s Commendation to Mr. and Mrs. Koizumi’’. Mr. Masuo Nishibayashi, Ambassador of Japan to Greece, also sent Mr. and Mrs. Koizumi a congratulatory message.

Mr. and Mrs. Koizumi commented, “It is an honour for us to accept this award for our activities. We are grateful for the support of the Japanese Embassy in building bridges of understanding and friendship between Ireland and Japan”.