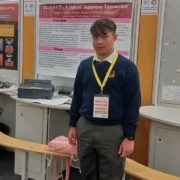 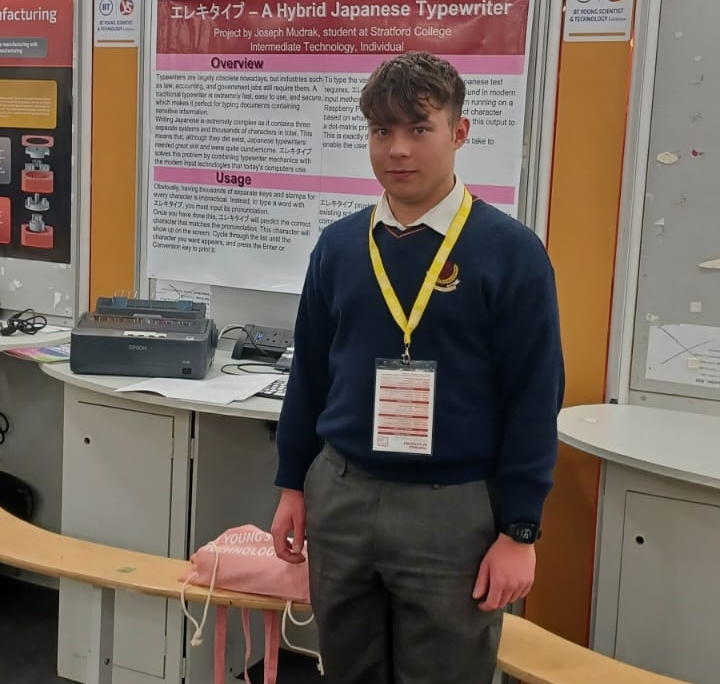 Joseph (14) has always loved to discover new and challenging things to learn. He learned to read when he was two years old, and by the time he was ten, he was teaching himself Chinese characters. He loves learning new languages and currently speaks Polish, English, and Irish, and is learning Japanese, French, and German. Joseph is also a pianist and has won a few competitions in Ireland. He is currently doing RIAM Grade 7 at the age of 14.

His passion has always been languages, different cultures of the world, music and programming. Joseph is also very interested in Japanese culture and language, and it is his dream to visit Japan one day.

After starting to learn Japanese at home by himself, he realised that Japanese is a very complex language, with thousands of different characters, which led Joseph to wondered how a hypothetical typewriter would work with such a writing system. After finding out about what currently exists and is available, he decided to make an electric version that fits all the characters used in Japanese onto a standard QWERTY keyboard. There are still industries where typewriters are in use, and this project is a robust and easy-to-use solution.

There were more than 1700 projects submitted for the competition of the 2023 BT Young Scientist & Technology Exhibition. The judges chose 550 for the final exhibition at RDS, Dublin, and Joseph’s project ‘エレキタイプ – A Hybrid Japanese Typewriter’ was among the finalists.

‘I very much enjoyed talking to you about your project on a Hybrid Japanese Typewriter. I had no idea how difficult  it is to type Japanese and I was surprised by the complexity of the problem. You presented your project with clarity and confidence. Well done!’ – Dr. Peter Taylor, Judge at the BTYSTE 2023 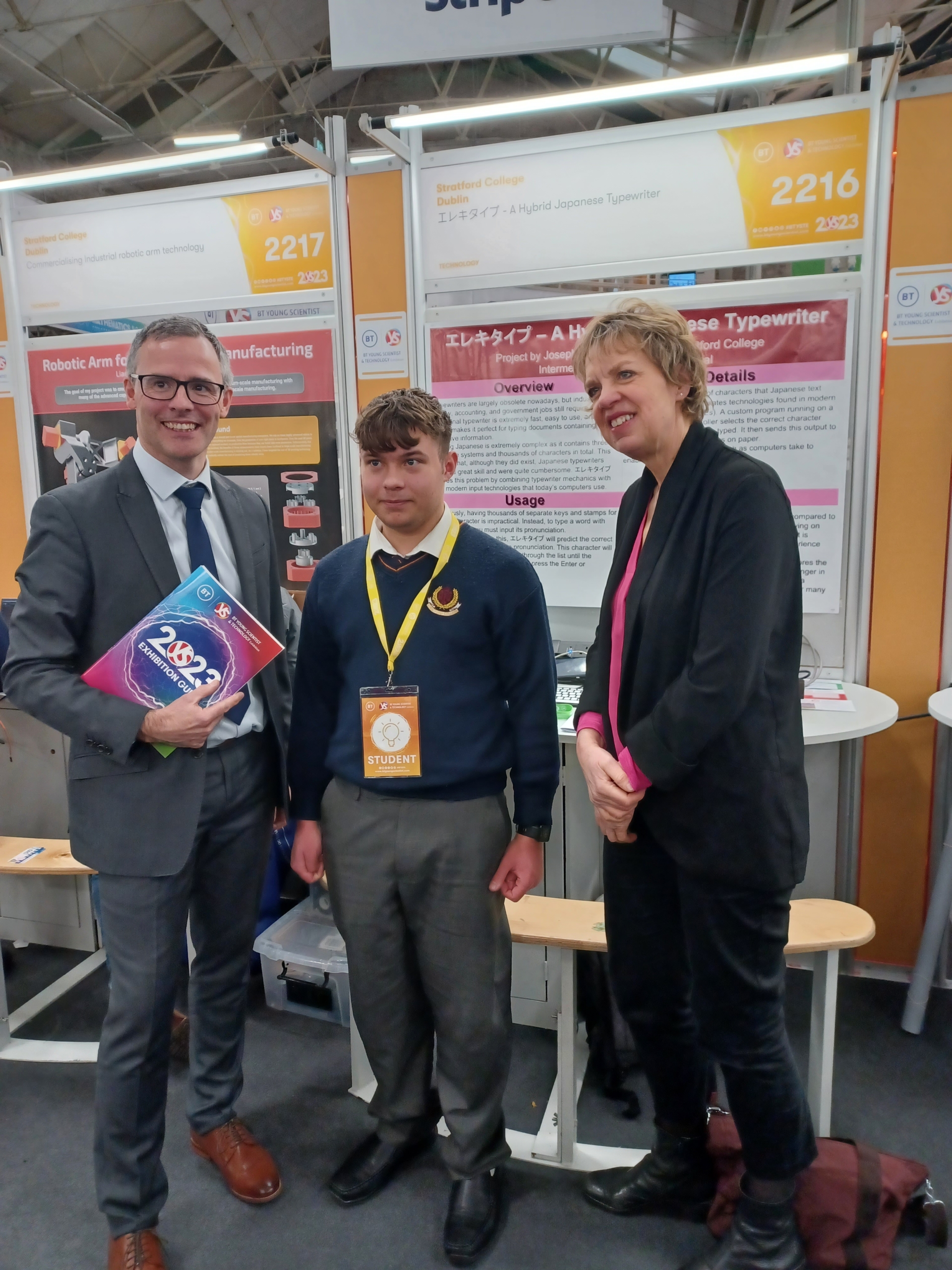 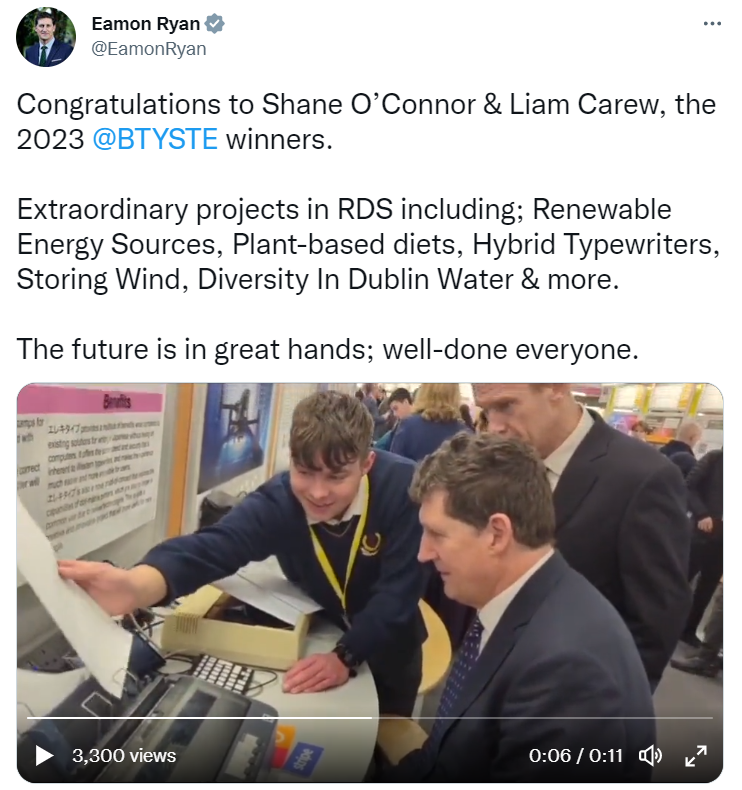 Joseph also had a wonderful opportunity to meet with Ms. Keiko Nakata, Embassy of Japan in Ireland, who was delighted to learn about his invention and received a gift book about Joseph’s project. 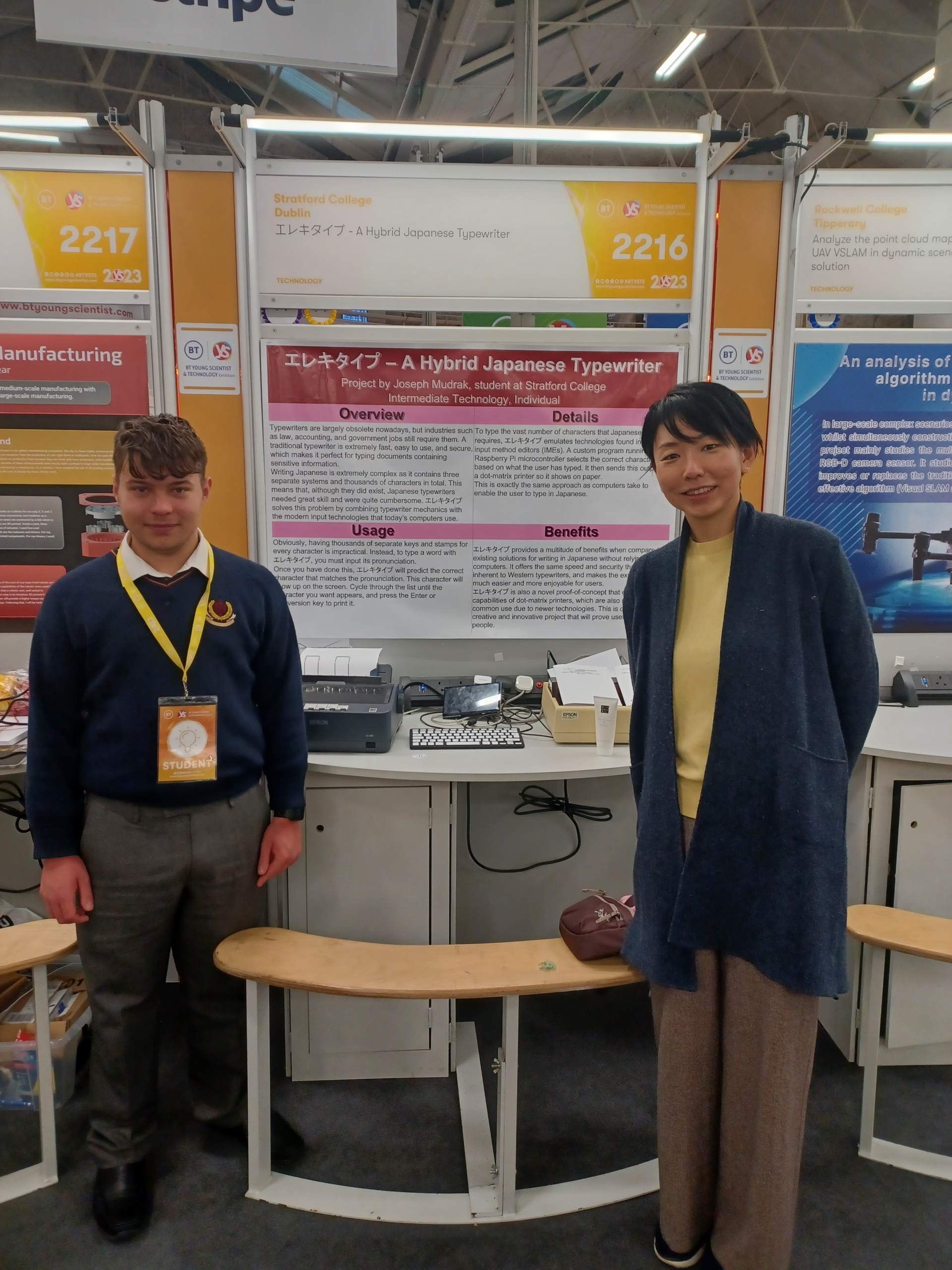 The BT Young Scientist & Technology Exhibition is much more than a competition – it is the experience of a lifetime for the students and teachers who take part. Designed to raise schools’ engagement in the critical subjects of science, technology, engineering, and maths (STEM), the Exhibition calls upon students aged 12-19 years from all over the island of Ireland to showcase innovative science and technology project. 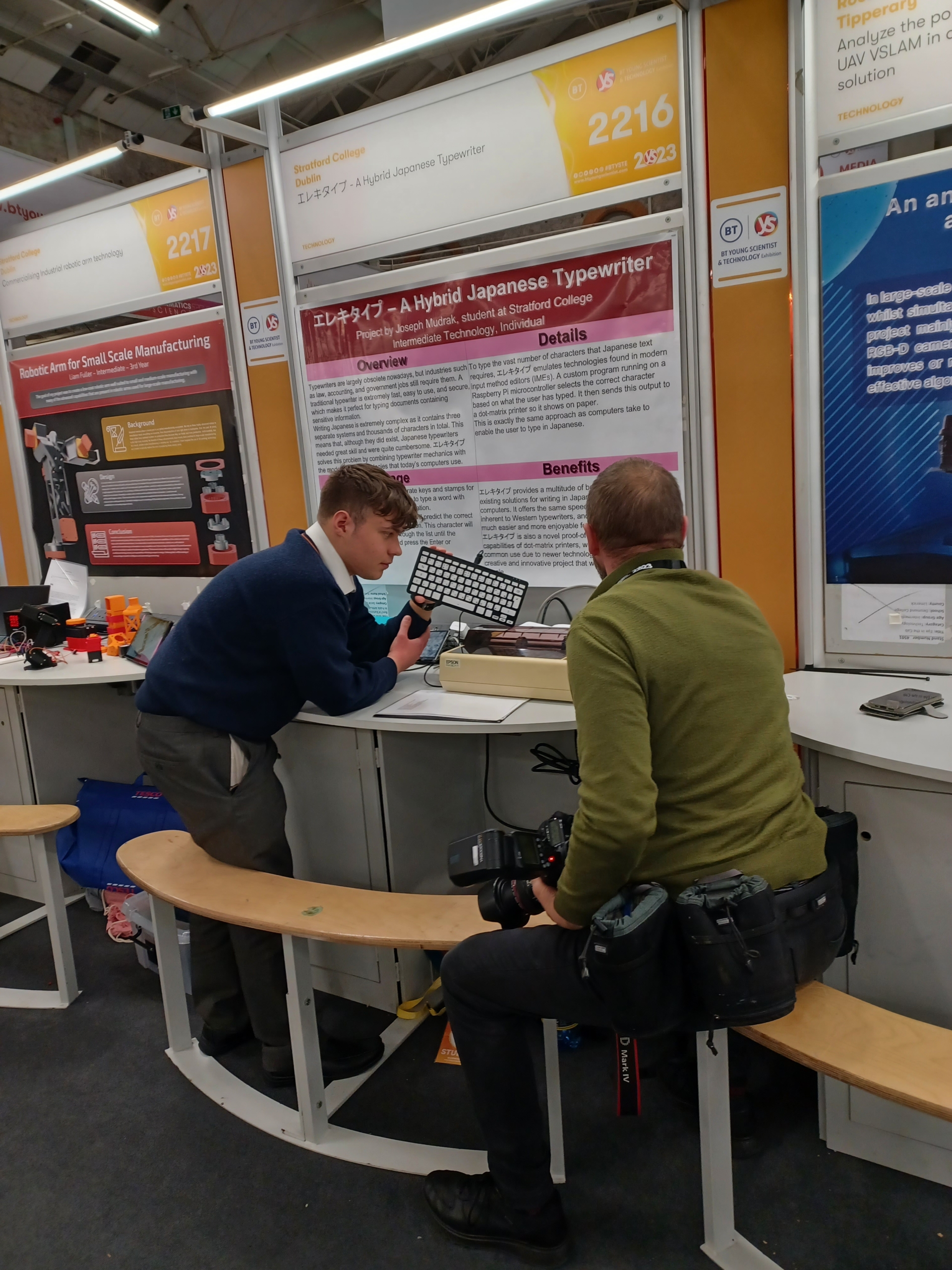 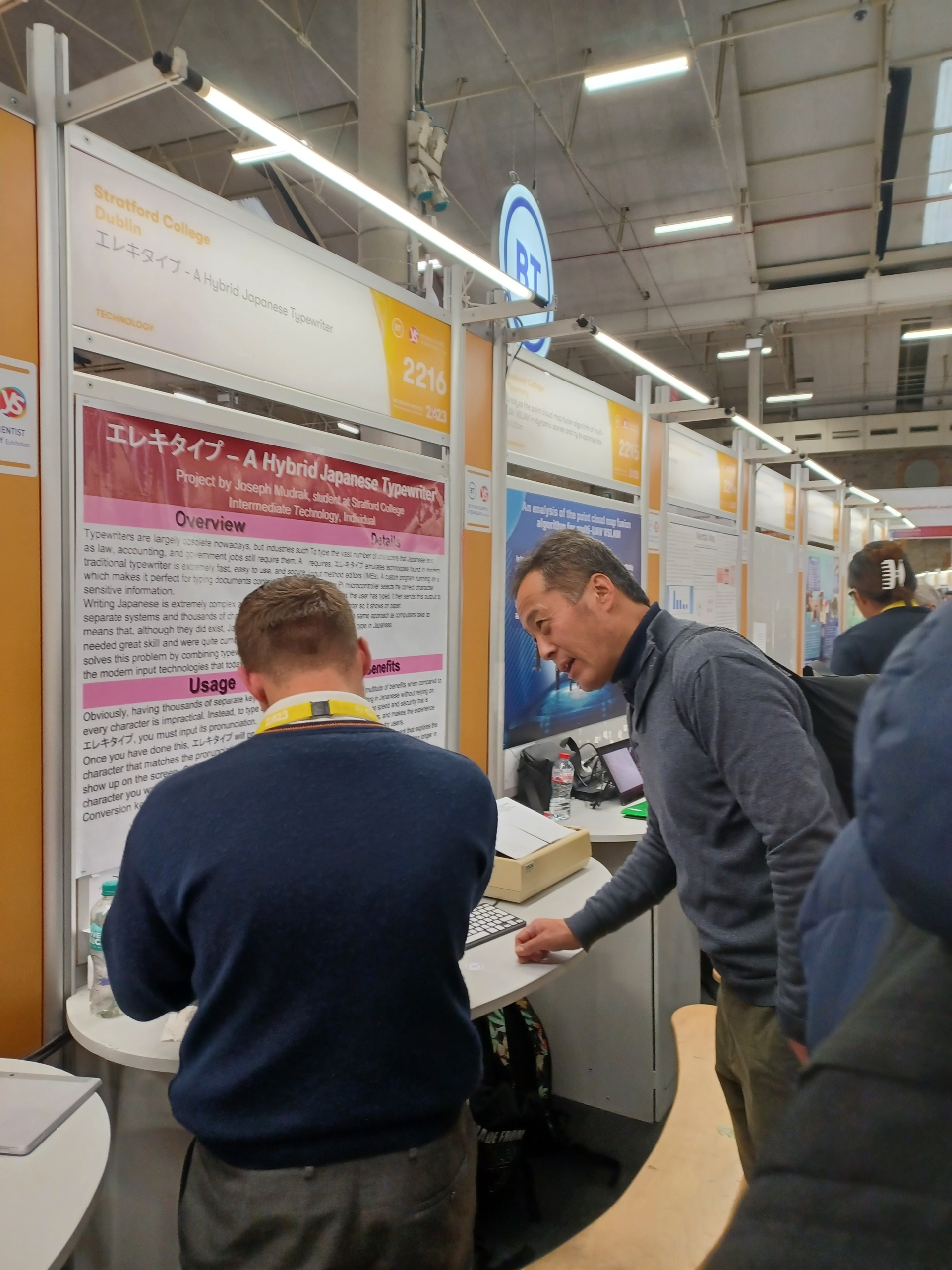