Together with UCD Japan and UCD Centre for Japanese Studies we are delighted to invite you to an online webinar ‘Why Women Leaders? Fostering Tomorrow’s Leaders in Japan.’ 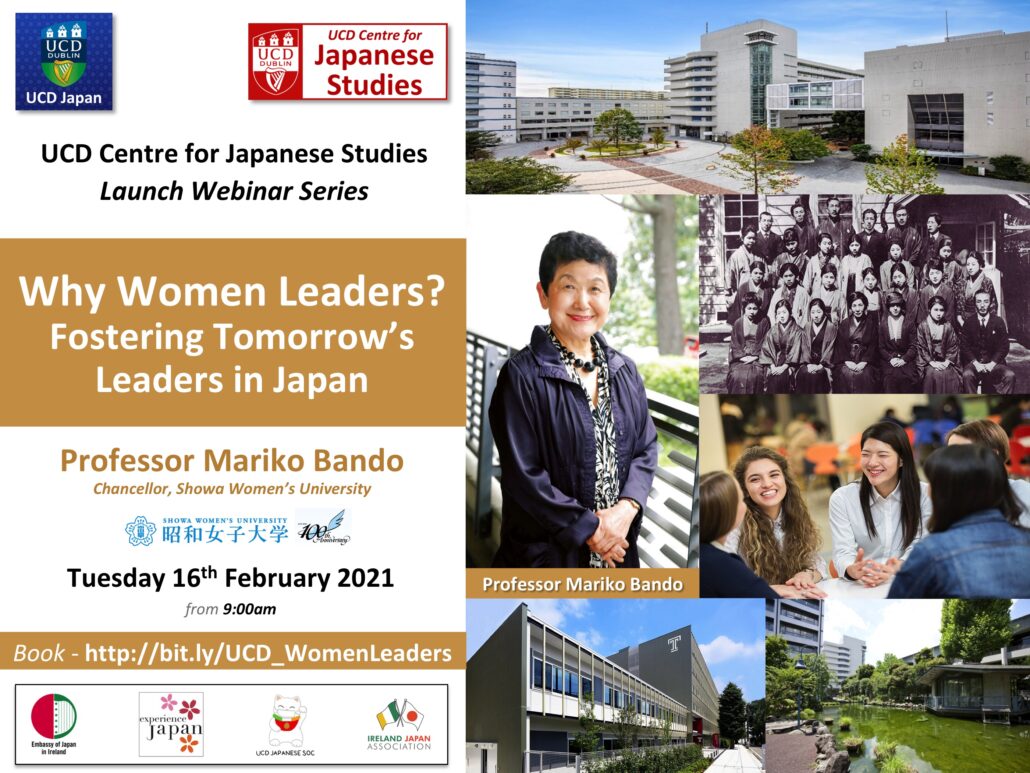 This event is partly pre-recorded with live Q&A Session.

A pioneering role-model and leading advocate for the empowerment of women and gender equality in Japan, Prof. Mariko Bando (Chancellor of Showa Women’s University) will speak about why fostering women leaders is so important for Japan and the world.

Prof. Mariko Bando is a prolific author of more than 40 books, including Toward a Gender-Equal Society and The Dignity of a Woman, which has sold more than 3 million copies and was Japan’s #1 best seller in 2007.

After graduating from the University of Tokyo in 1969, she embarked on a path-breaking career that began as the first woman to be employed at the Japanese Prime Minister’s Office as a career bureaucrat. She chose to continue working even after marriage and children and served the Japanese government in various capacities for 34 years. In 1998 she became the first woman to serve as Japanese Consul General in Brisbane, Australia. From 2001-03, she was Director-General of the Bureau for Gender Equality under Prime Minister Junichiro Koizumi.

She was director of the Japan National Committee of UNIFEM (the United Nations Development Fund for Women).

She was a visiting research fellow at Harvard University’s Bunting Institute and the Kennedy School of Government, where she conducted a comparative study of women executives in the US and Japan. She joined Showa Women’s University in 2004, became president in 2007 and Chancellor in 2014. She is a proud mother of two daughters.

For more information and to register: https://www.eventbrite.ie/e/launch-webinar-why-women-leaders-fostering-tomorrows-leaders-in-japan-tickets-134527187439

We use cookies to ensure that we give you the best experience on our website. If you continue to use this site we will assume that you are happy with it.OkNoCookies Policy
Scroll to top